I was born in Croydon on 18 th January 1956. I think my Scottish father had some hand in the choice of Alexander Grant as my Christian names, and I have never regretted his choice. I have an older brother, a younger sister and two younger brothers.

My education generally went well, at Royal Russell School, Shirley, and Hawes Down Secondary School, West Wickham. Although fairly proficient in art, I never thought that a career was a realistic plan, and was actively discouraged by my “careers” master. Even when expressing a more technical and academic application of art in cartography with the Ordnance Survey, in which I had a passionate interest, was greeted with a rather dismal “too difficult to get into”. If I'm honest, as with my other idea of being an architect, my mathematics was probably not up to it. So, without a clear plan or path ahead of me, I left school at 18 with eight ‘O'levels, one ‘A' level, and a rather less than urgent attitude that would worry me if encountered in a school leaver of today. My parents showed their frustration in my lack of direction, but what can any parent do? 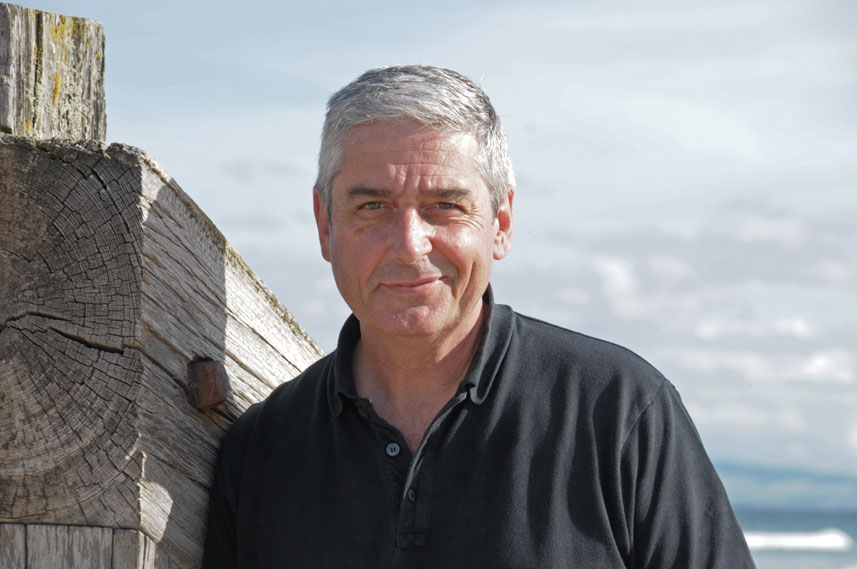 My art master had encouraged me to go on to Art College. I had applied to Hornsey College of Art for a year foundation course, a “try everything and see what you like” sort of thing. I thought I could travel to north London for the three days a week that were asked for, and if it became too much, would get a part-time job and move up there. Well, “The best laid plans…” All was arranged, and my grant cheque was to be with the college on enrolment day. No cheque was forthcoming. Not then, or in the subsequent three weeks, and having used all my savings, and any goodwill of my parents, I had to give it up as a bad job. Again, with hindsight, it was probably for the best. After working for one day on a lathe in an electrical components factory, a week in a large commercial bakers watching hundreds of proofing loaves crawl past on their way to the ovens, a month in a steel foundry, and three months as a chippy's labourer (easily the best of the bunch), I was no closer to knowing what I wanted to be doing in another twenty years.


At this point, I had a call from my old art master. He knew of an advertising studio in London that was looking for a junior. My father still had enough patience, and faith, to get me fitted into a jacket and trousers, and off I trooped, to land a job for the starting salary of £14 a week, as a gopher in a very successful photographic retouching studio. I admit, I was completely in awe of the work that was being done in this place, but I must say, a bit removed. The process of airbrushing something into a photograph that was not there on a dye transfer print, or bleaching out the background on a 10” x 8' transparency and swabbing in a clean replacement colour was very impressive, but not something that caught my attention much. However, attached to the retouching firm was a small illustration studio of four people, when passing my desk one day, showed an interest in my doodling on a sketchpad, and asked if I would like to work for them. After seeing the work they did, I thought it much more up my street, so I had found my in a rather round the houses way, to what I would be doing as a worthwhile and challenging career.


The arrangement was a sort of apprentership. For a good period of time, my job would involve me sweeping-up, changing water pots, delivering and fetching work from mainly the West-end of London, general make-up of presentations and the ubiquitous sandwich and coffee runs. Over this time however, I was able to watch over the shoulders of the resident illustrator, and any freelancer that came to work in house. As the company grew, they took on more artists, and they were all kind and patient enough to help me learn the ropes of Magic Markers, acrylic paint and other mediums, especially when given my first proper jobs to do. After building up to larger and more significant work, including a couple of overnight jobs, I finally got to work in the studio full time, and another messenger was brought in to replace me. One step on the ladder!


Pretty soon, I became a freelancer, as all in-house illustrators were retained on that basis. And that is pretty much how it stayed, moving buildings a few times, but always with the same people. My work got better, and I could pretty much put a good standard of work to most subjects and mediums. I had a few good independent regular clients, and had work printed in advertising and publishing.

Running alongside my working life, I had for many years a keen interest in aviation, mainly historical warbirds. Having grown up within a few miles of Biggin Hill, I had started going to air shows there at quite a young age, and when I got my own bike, would ride up there through the lanes and across the valley that most of the air show pilots seem to enjoy coming out of as part of their display.

I have happy memories of shows there; of queuing to walk through the fuselage of the ‘white' Lancaster, the aircraft that eventually became “Just Jane”. A couple of Starfighters coming out of the valley unannounced, and sheltering beneath the wing of the Vulcan while a lightning did a low display under a very low cloud base.

It was at Biggin also, when for the first time, I was sentimental about a civilian aircraft. I cannot remember the year, but it was when there were far less limits and restrictions on displays. A Tiger Moth had come down in the car park after failing to recover from a loop OVER the crowd. It was made known on the public address the pilot was not seriously hurt. I was however shocked by the state of the aircraft. I did not understand until then how aircraft were built.

There was more often than not a Moth puttering it's sedate way across the sky over our house, so I knew the type well, but to see a broken one was quite a shock to a this youngster, and I have a very soft spot for the deHavilland Tiger Moth since. 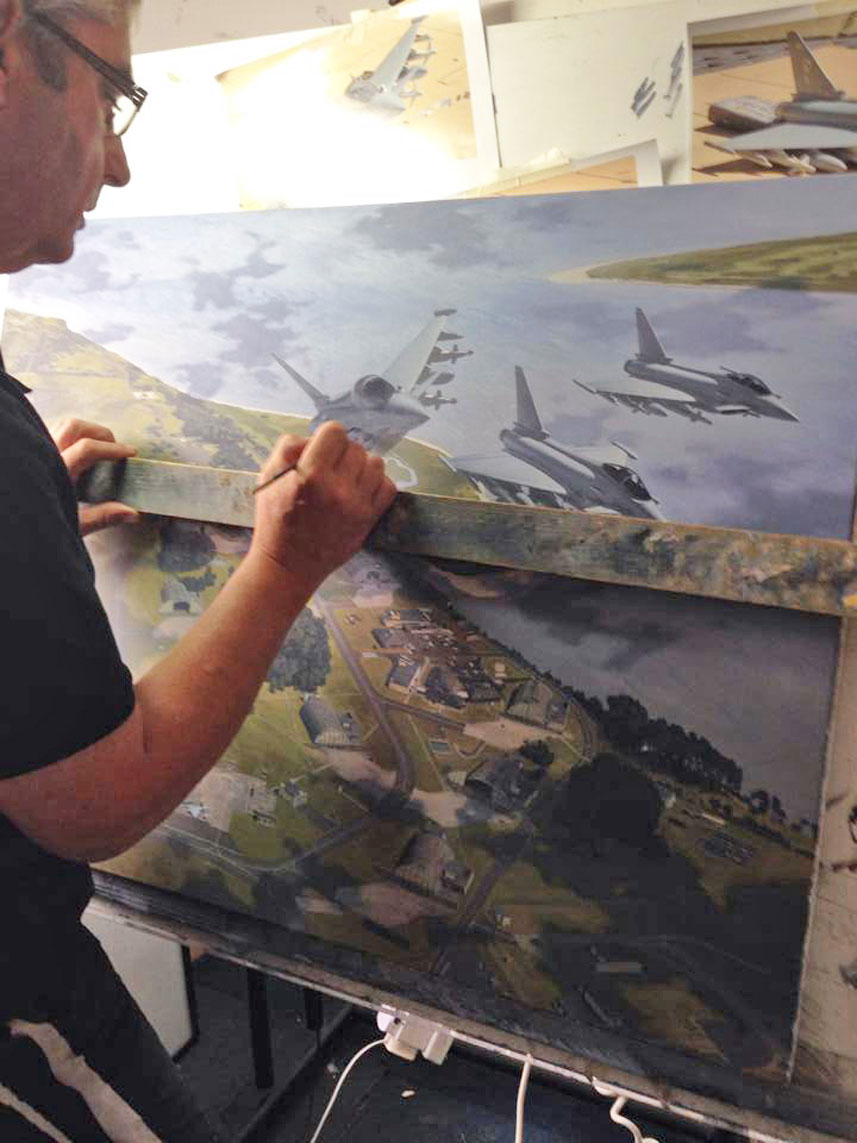 Moving on a few years, I regularly read the historical aviation magazines, and advertised in there were numerous artists selling prints. At the air shows too, you could see these close up, and I developed my love of Frank Wooten and Michael Turner's work. Over this time, I started to get a bit picky if I thought something was below par, or just plain wrong (not from the above names I hasten to add!). Colleagues at work would say, “If you think it's not very good, you do better.”

I also got great support from my wife Heather, who is a much more daring person than I, and as my greatest fan, helped me build the confidence to put my money where my mouth was. So I started pottering around with oil paints for the first time since my A Level art exam. I did myself a huge favour by joining the Guild of Aviation Artists, of which several annual exhibitions I had visited. They promote the sharing of knowledge, and the encouragement I received from all levels when joining as a beginner was so helpful and motivating. After trying, and failing to get some meaningful training in my local art class in the dark art of oil painting, I decided to jump in the deep end, and put a painting or two up for selection for their next Annual Exhibition.

Not only were my four paintings accepted as of a sufficient standard, but one of them, “Sunlit Silence” was awarded the main prize, “Painting of the Year”, and along with an award for best newcomer, I was honoured to have them presented to me by HRH Prince Andrew. 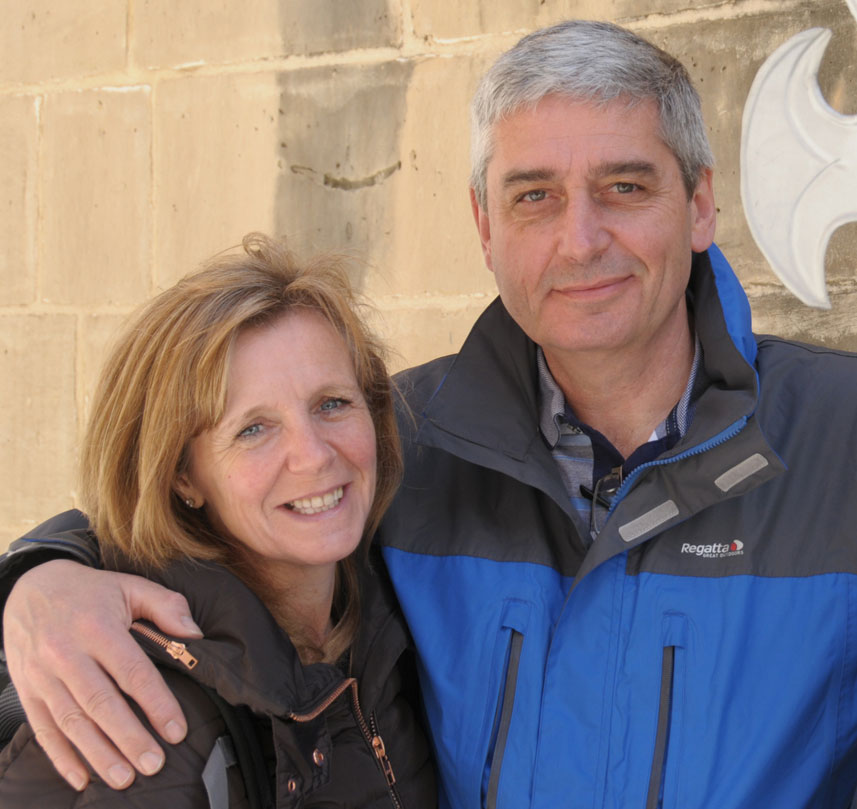 That was in 2003, and for a while I continued to work in commercial illustration, and painted in my spare time. However, when small commissions started to come my way, there came a point when the two disciplines were conflicting, and I found myself saying ‘No' to phone calls at 5 o'clock on a Friday afternoon for advertising work wanted on Monday morning, and concentrating on aviation fine art. Frankly, I wish I had done it ten or fifteen years earlier. I would have learned more about oil painting, and maybe met my painting inspiration, Frank Wooten, who had been President of the Guild of Aviation Artists, but unfortunately had passed away before I joined.


Now, after getting my name and reputation out in a few places, I have done some really interesting work for a variety of people, which I think my gallery of prints shows. Small private aircraft, large passenger airliners, wartime fighters and bombers, fixed wing and rotary wing. Some have been for private individuals, some for large companies. I find working for active service squadrons an honour and a pleasure, and particularly enjoy talking to the aircrew about the painting they want, and their reaction to the finished thing. I like the thought of contributing on canvas to the recording of their history, as this is often the purpose of the commission. I have been lucky enough to work with the USAF, as well as the Army Air Corps and the RAF in the United Kingdom.