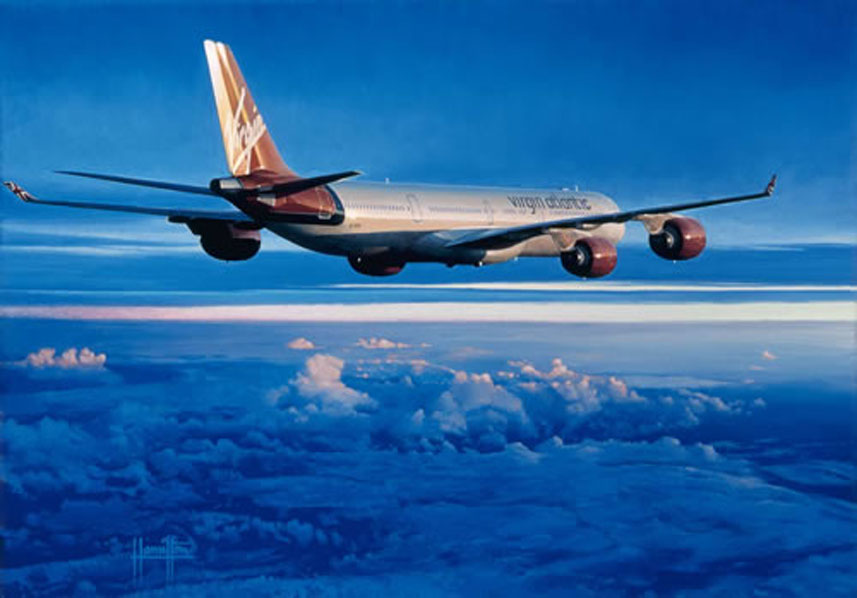 The A340 was originally launched as a long range complement to the short range A320, and the medium range A330. Airbus's problem at that time was ETOPS (Extended range Twin engine Operational Performance Standard). In short, as these standards were defined at the time, twin engine aircraft had to stay within 60 minutes flying time of a suitable diversion airport. This prevented Airbus's twin jets from competing on long over-water routes. Four engines would fill that gap in their fleet.

The 600 series has the longest fuselage of any airliner in the world. It's 10m longer than the 300 series, (2.3m longer than even the A380-800) with a larger wing area. Fuel load is also increased and it sports Rolls Royce Trent 556 engines.

Virgin Atlantic ran its first A340 service in August 2002, and their slogan for the 340, “4Engines4LongHaul” inspired the title. The painting was commissioned by a Virgin Atlantic pilot's wife for his birthday. He made his first landing at London Heathrow in this aircraft G-VFIT on 16th September 2006.