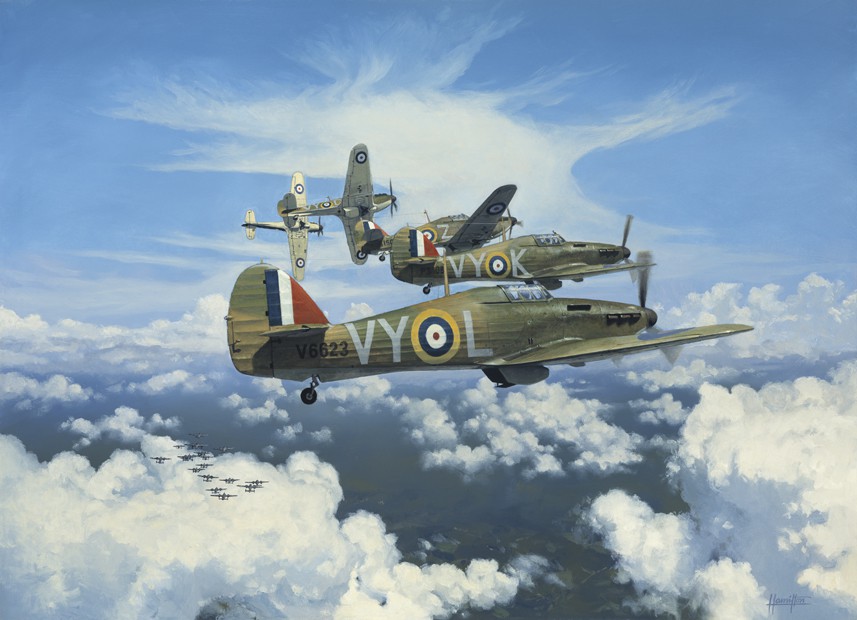 Hurricanes of 85 Squadron, led by Squadron Leader P.W.Townsend, attacking Dornier 17's during the Battle of Britain

The artist and three pilots who flew with 85 Squadron in the Battle of Britain sign each print: Nigel Kemp, "Tommy" Thompson, and Doug Nichols. £10 will be donated to the Royal Air Force Benevolent Fund from the sale of each print

The idea for this painting came from reading about a senior pilot of 85 Sqn. Flt. Lt. H.R.Hamilton, a Canadian from New Brunswick. The Surname of Hamilton of course caught my eye, and I learnt that he had been shot down and killed near Camber Castle, Sussex.

Further reading showed 85 to be a squadron who were in the thick of the fighting for much of the time. Therefore, I decided to paint a section of 85 Sqn. Hurricanes with "Hammy" Hamilton's VY-L in the foreground, the aircraft in which he was to lose his life. He died on the evening of 29th August 1940, aged 23.