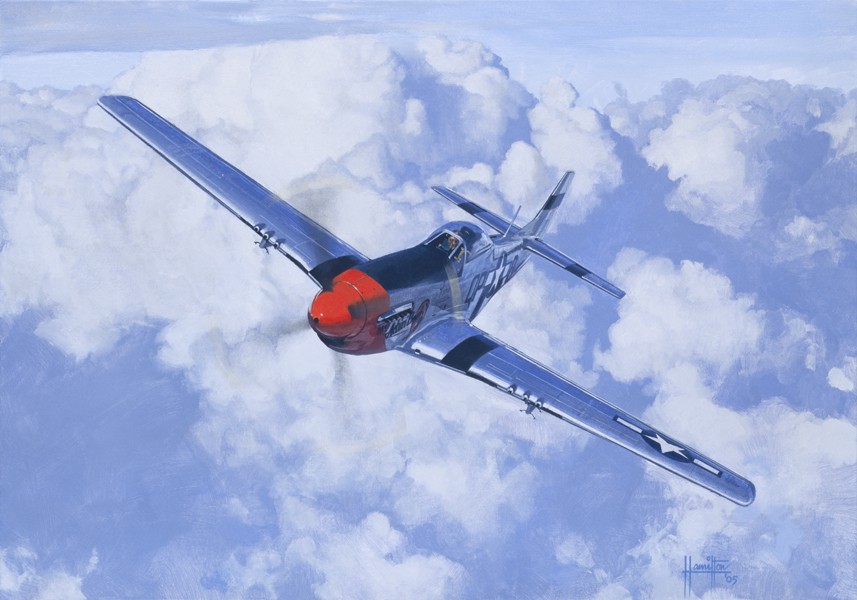 My painting features the P-51 D “My Achin' Back!” of 334th Fighter Squadron, 4th Fighter Group. The ‘D' featured a ‘bubble' canopy, cut down rear fuselage and added fin fillet.When the British Purchasing Commission asked North American Aviation to design a long range fighter, they came up with the P-51A in just 117 days.

The Mustang, as the British had named it, originally had an Allison engine fitted, and in operational service it was found wanting over 12,000ft. This restricted its use rather. However, following a fortuitous meeting, and an inspired idea, a Rolls Royce Merlin 61 was mated to the Mustang, and the P-51 B was born. It proved to be a remarkable all round fighter, with the ace in the pack being its range. With under wing drop fuel tanks, it could fly to Berlin and back and still have a small ‘fighting' reserve. This at a time when the American daylight bombing of Germany was suffering grievous casualties, and needed the escorts to match the range of the bombers.