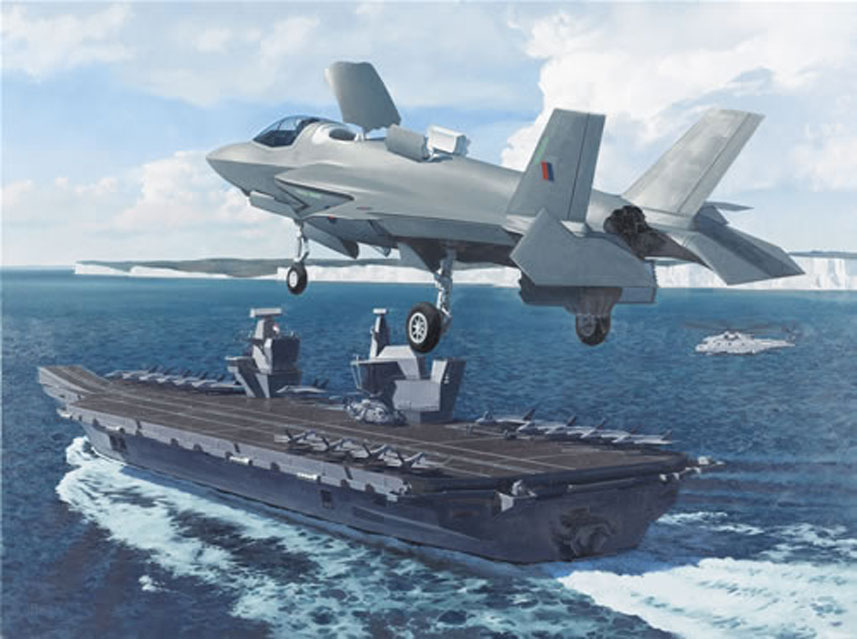 There are no prints available for this painting, as the Copyright to the painting has been sold

Lockheed Martin is developing the F-35 Lightning II with eight partners: The United Kingdom, Canada, Australia, Denmark, The Netherlands, Turkey, Norway and Italy. It is a fifth generation fighter which, as well as employing stealth technology, has the capability for supersonic flight and vertical landing. Formerly known as the Joint Strike Fighter (JSF), it will be available in standard, short take-off vertical landing (STOVL), and carrier-born versions. The Lightning II was conceived as a true multi roll aircraft that can achieve close air support, tactical bombing and air-to-air combat.

Lockheed Martin came up with the idea of commissioning an artist from each of the partner nations to depict that country's version of the F-35, over a geographical feature of their nation. After my work for them on the C-130/Marshalls celebration, Lockheed Martin UK kindly chose me to paint the United Kingdoms contribution to this unique project.

This was my interpretation of the brief. It features the F-35B STOVL version ordered for the RAF, approaching to land on one of the proposed new Queen Elizabeth Class CVF carriers being built for the Royal Navy, all set in front of the Seven Sisters white cliffs in the English Channel.