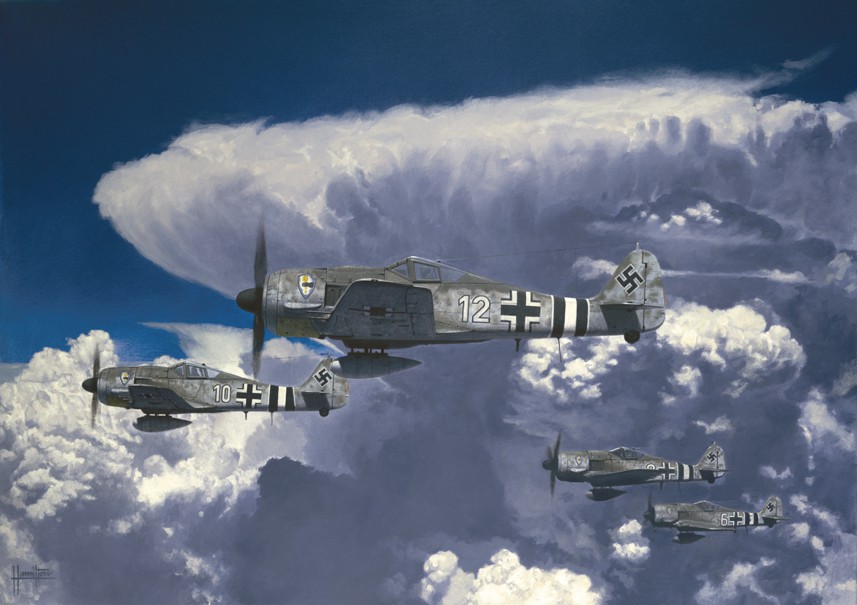 An 8th November 1943 Generalleutnant Galland sent a signal to his unit commanders. It read:

“German fighters have been unable to obtain decisive success in the defence against American four-engine formations. Even the introduction of new weaponry has not appreciably changed the situation. The main reason for this is the failure of formation leaders to lead up whole formations for attack at the closest possible range. Reichmarschall Goring has therefore ordered the establishment of a Sturmstaffel whose task will be to break up allied formations by means of an all out attack with more heavily armed fighters in close formation and at the closest range. Such attacks that are undertaken are to be pressed home to the very heart of the allied formation whatever happens and without regard to losses until the formation is annihilated.”

And so the concept of Sturmstaffel 1 was born. The theory of its operational tactics had been developed in the summer of '43 by Major Hans-Gunter von Koratzki. He had concluded, through studying gun camera footage and talking to experienced pilots that concentrated formation attacks from the rear of the American bomber combat boxes was the thing to do, even though frontal attacks were being used with some success at the time.

All aircrew of Sturmstaffel 1 were volunteers. Some idea of their task can be gleaned from their “code” of operations:

Without exception, the enemy will be approached in close formation.
Losses during the approach will be immediately made up by closing up with the attack leader

The enemy will be shot down at the closest range. If that becomes impossible, ramming will be the only alternative.
The Sturm pilot will remain with the damaged bomber until the aircraft impacts.

This was very dangerous work. The concentrated 50 cal. Defensive fire from the American formations was well known to the German pilots, so extra armour was fitted to their FW-190's in the form of 50mm glass front windscreen, 30mm glass sides on the canopy , 5mm steel on the fuselage around the cockpit and seat, and 12mm behind the head.